By Emily Park | IN Kansas City

The Women Presidents Organization and JPMorgan Chase have released the 15th annual list of the 50 Fastest Growing Women-Owned/Led Companies, and not only is a Kansas City-based company on the list but it’s ranked in the top ten.

“Ten years ago, we formed Lever1 to provide outsourced HR services,” says Brune, president of Lever1. “For a long time, outsourcing was a negative word, but when we launched Lever1 that tide was shifting, and entrepreneurs were understanding that to focus on what they do, they need to let experts do the rest.”

Brune says it was quite the reward to learn her company was not only one of the fastest growing women-led companies in the world, but also within the top ten.

“I’m just really thrilled that the growth that we’re feeling is substantiated by that award,” says Brune. “We’re certainly feeling that effort as we bring on new hires that are coming on board to serve our clients. It’s really rewarding to have that acknowledgment that our hard work is paying off.”

Ask Brune what advice she has for women entrepreneurs in the early stages of their careers, and she’ll say, “Lean in and accept the challenges. I learned everything I knew on the job by not being afraid to work hard and raise my hand and take on additional responsibilities. I’ve also had three children through the ten years we’ve been in business, so I would also say you really can have it all—if you’re up for it.” 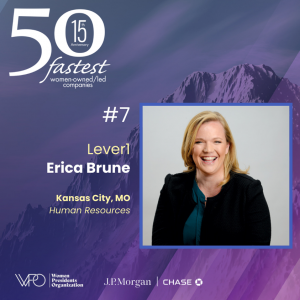